About us > blog  > Chornohirskyi Ridge

On the boundary of Ivano-Frankivsk and Zakarpattia regions 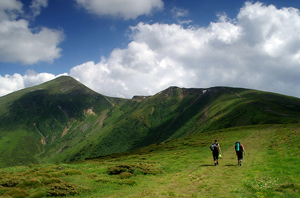 The Ukrainian Carpathians are located on the territory of Transcarpathians (Zakarpattia), Lviv, Ivano-Frankivsk and Chernivtsi regions, and occupy the area of over 24 thousand sq. km. The length from the peaks of Sian to the river head of Suchava is 280 km, the width is over 100 km. The Ukrainian Carpathians are not high (Hoverla’s highest peak is 2061 m above sea level), relatively flat, but very picturesque. The local sceneries are not cascades of bare surfaces but green ridges, which form a beautiful combination of colours. No wonder they are called the forest mountains. First goes a broad strip of spruce, fir-spruce forests and closer to the valleys go steep slopes covered with mighty beech forests on brown mountain forest soils. From the upper boundaries of the forest to the foot of the mountains, a continuous carpet is broken by windows of meadows, and on the hills and plains of the foothills, dominate gardens, arable lands and vineyards.

The most popular walking route of the Ukrainian Carpathians passes through the Chornohirskyi ridge — the highest mountain range, located on the border of Ivano-Frankivsk and Zakarpattia regions. The weather in Chornohora is unbelievably changeable: from torching sun to sleet. In summer tourists in Chornohora have a chance to burn even small spots of skin not protected by clothing under the sun, and in winter — to get frostbite from the cold. Chornohoras Indian summer can be a real revelation for travelers. Due to the ice formation, Chornohora has a characteristic feature — boilers and ledges, cut by veins of flows, ramparts, and numerous lakes. The Chornohirskyi ridge includes the highest peak of the Ukrainian Carpathians — Hoverla, which is divided into two parts: the northern slope belongs to Vorokhta and the southern one — to Yasen (the Zakarpattia). The most famous Chornohora lake, associated with a lot of legends, is called Nesamovyte (Raging). People say that a stone thrown into it triggers a storm, also it is believed that the place of the lake was once a venue for those who wanted to commit a suicide striking up contracts with the devil and even in winter ice used to be broken here. It is also said that the wood soaked in waters of Nesamovyte, was used to produce the loudest trembitas.

It is better to travel to Chornohora through Vorokhta — there are a railway and a bus stations. At the foot of the mountain, there is a sports complex «Zarosliak» — the largest and best known in the area. The most popular tourist route is climbing Hoverla from this very sports complex. The length of the route through Chornohora is 23 kilometers, and it can be trekked in 2-3 days. However, distance and time are not important compared to experiences that are in store for travelers.

The Carpathians are flat mountains without rocky brows, with their bottoms covered by conifer and beech forests. Beech forests are the main treasure of the Carpathians; it is die only place in Europe with such ancient primal forests, a unique ecological system and numerous endemic plants. Carpathian beech forests are included in the UNESCO World heritage list. Besides the smereka (Carpathian spruce) and beech, the mountains are also rich in oaks, hornbeams, pines, alders, black cherries, hazel, maples and ash trees. Red bilberry and blackberry grow on treeless mountain tops, while poloniny (the name of Carpathian mountain meadows) are all covered by bright flowers and sweet-smelling miscellaneous herbs.

The highest mountain in Ukraine is Goverla, which is 2,060 m high. Its name was derived from the Hungarian Hóvár — “snowy mountain”. It would not take you long to climb it, as there are many tourist routes to Goverla. At the top of the mountain, the state symbol of the country, the trident, is installed. The river Prut tames from near Goverla: it comes down form the mountains in cascades with the total height of 80 meters, thus forming the Prut Waterfall.

The tourist route to the Petros mountain (2,020 m) is very popular. This is a rather steep and rocky mountain, mostly covered with bushes. On its easter slope there is a tourist camp, and tourists who make it to the top can see a small wooden chapel there.

Another mountain favored by tourists is Pip Ivan (2,022 m). It got its name because of the black cliff on the very top, that looked like a pop (Ukrainian priest) in the cassock, which could be seen before the rockslide happened. At the altitude of more than 2,000 meters, a lone mountain pine grows on the slope, which is the most highly-growing tree in the country. At the top of the mountain there is another champion, the building situated at the highest altitude in the country. This is a half-constructed Polish observatory, forsaken in the years of World War II. For the most part of the year the observatory is covered with snow which gave it the name of “White Elephant”.