You are invited to land in the village of Kryvorivnya, in the heart of the Hutsul land, and attend the Christmas service at a small seventeenth-century wooden church sitting on the mountain slope. The village used to be called Zhab’ye and is indeed the focal point of the area inhabited by the Hutsuls where their ancient traditions continue to be maintained, religious feasts and holidays are celebrated the way they were hundreds of years ago, and life in general seems to have hardly changed since time immemorial.

The mountains attracted by their scenic beauty, relative proximity from town, cheap accommodation and board — and, to a great extent — by the ancient culture and traditions of the Hutsuls, the indigenous people who seemed to have been living in the Carpathians since these mountains came into existence.

Now, in the early twenty-first century there are Hutsul villages which have hardly changed in the past hundred years. There is no natural gas in their homes to cook on; sometimes there is no running water, no sewage system or no electric power. There are no modern roads to connect them to the outside world. They go to the same age-old churches their great-great-great-… grand parents went to — but on Christmas, the members of the Hutsul families come from whatever distant land they may happen to be living to celebrate the feast and partake of Christmas dinner in the home of their ancestors.

Program. Christmas tour in the Carpathians

Meeting in Ivano-Frankivsk at 12:00. If you wish we can organize your transfer to the city.

Short stop in Dora village to see the Greek Catholic Studio monastery of St. Elias and St. John the Baptist.

Next stop in Yaremche. Visiting the craft market and the famous Yaremche waterfall.

Check-in in the lodge in Verkhovyna.

Breakfast in the lodge.

Drive to Kryvorivnya. Participation in the Holy Mess in the Church of Nativity of the Blessed Virgin Mary (built in 1719). This temple is one of the oldest in Hutsulshchyna.

After the Liturgy you will see the ceremony of blessing the carol singers: priest blesses wassailers, they sing carol near the church and then go caroling to each house. They greet each member of the family with the personal carol; devote their carols even to cattle and bees. Groups of waissailers, dressed in the national Hutsul costumes, carrying axes and musician instruments in their hands, may consist of several dozens of people.

After the dinner the local carolers will visit the house and make a performance with traditional Christmas songs and wishes.

Breakfast in the lodge.

After the breakfast you can choose the activities:
– 1st option: excursion Kosiv – Kolomyya. You will see the Museum of Folk Art and Hutsulshchyna Life in Kosiv and the Museum of pysanka in Kolomyya.
– 2nd option: skiing in the Bukovel ski resort.

Regress to the hotel.

Epecial performance in the Paradzhanov museum (the house where the Shadows of Forgotten Ancestors was made): concert program with Christmas carols and play-acts. The program includes tasting the local moonshine and delicious snacks.

Traditions of celebrating Christmas in the Carpathians

In Ukraine, we celebrate the birth of Jesus Christ a long time before Christmas, even if the key moment is the January 6th dinner (see below the explanation about calendar differences). The “Christmas dinner” (Sviata Vetchera) does not include meat and dairy product. First, we lay some straw or hay on the table, to represent the place where Jesus Christ was born.

Then two tablecloths are stacked up, the first one for people alive, the other one for the dead ancestors. They add a place setting for the dead beloved’s soul.

Some Hutsul people light some resin and take it all over the place three times to chase away bad spirits.

Dinner starts when the first star appears in the sky (it symbolizes the star that directed the Magi to Bethlehem). They lay on the table a sheaf (Didukh) which represents their ancestors. They bring to animals in the cowshed a double portion of food in order to thank them for their role. They warmed Jesus and left him the poultry feed as a cradle (this is why we don’t eat meat).

The meal begins with a prayer ending with “Khrystos rodyvsya!” (Jesus is born) everyone around answer “Slavite yoho!” (Glorify Him).

Before eating the 12 dishes, like the 12 apostles, they lay some Koutia (kuttia) (mix of wheat, poppy, walnut and honey) on the window for the Angels. The Koutia is the first dished ate, it symbolizes prosperity. According to an old tradition, we throw a spoon of Koutia on the ceiling, if it stays stuck on it, it will be a good year. This popular tradition is about to disappear today. All day long, children go from house to house to sing some “Koliady” (Christmas songs) and they receive some money as a reward. Some children are disguised as Magi. During the evening, it is the adults’ turn to make choirs and sing from house to house.

In some towns, the following day after the mass, the priest blesses orchestras which will also go from houses to houses. These “Koliady” end on the January 13th morning, they are replaced by the Malanka.

The Ukrainians are currently based on the Julian calendar for the religious celebrations, in contrast with the Gregorian calendar. Firstly, Julius Caesar asked to his astronomers to reschedule the calendar year on the solar year. It gave birth to the Caesarean calendar. It was far to be perfect, so in 1582 pope Gregory XIII decided to readjust it and a 10-day difference appeared (currently 13 days). But in 1054, the Great Schism happened between the Roman Catholic Church and the Orthodox Church. This is why during the 16th century; only the Catholic Church modified its calendar. This difference only results into different religious celebrations dates according to Churches. This is why Christmas is celebrated on January 7th and New Year on January 14th in Ukraine.

Christmastime in the Carpathians

A week before Christmas, the Hutsul women begin tidying and cleaning up their houses and the yard and what’s in the yard. When everything is washed, scrubbed and properly arranged, then comes the time of cooking — twelve dishes are an absolute must for Christmas dinner. Kalachi and zavyvanyky (sort of cakes) are baked; mushrooms, fish, varenyky (stuffed dumplings), holubtsi (meat in cabbage leaves), uzvar (soft drink made of dried fruit), stewed cabbage and beets are among the traditional dishes, but these days you’ll more often than not see a herring bought at the local store on the festive table rather than fish caught in the nearby mountain stream. Fish that were abundant in the mountain streams a hundred years ago have become scarce. Also, if in earlier times all the food was cooked at home, these days some food, particularly deserts, is purchased in stores.

Nevertheless, the fundamental traditions remain inviolate. After attending the service in the local church, the Hutsuls proceed to the cemetery carrying candles which were lit in the church.

In most cases, the cemeteries are situated quite close to the churches. The candles are then put on the graves — the flames of hundreds of candles in the quiet of the cemetery, fiery reflections dancing on the high snowdrifts in the frosty, clean air under the bottomless, black sky, studded with stars, the dark silhouettes of the mountains, is a sight that leaves no heart untouched. The Hutsuls believe that at that time the souls of the dead visit the houses of their descendants.

At Christmas-eve dinner (called Svyat-vechir — “Holy Night”), the Hutsuls put a bit from every dish on the table into a big bowl for their ancestors to try the dainties. This bowl is then taken around the house and to the barn to treat the sheep and the cow and the fowl to the festive meal (but you must not offer it to the swine and dogs). After that the bowl is placed on the windowsill and it stays there as long as the holiday lasts. A similar tradition was observed among the ancient Scandinavians, Galls, Goths and other European people.

After the prayer which all the family joins in, a spoonful of kutya, “the holy dish” of boiled rice, wheat, raisins, honey and other ingredients, is thrown in the direction of the stove — like a millennium ago, it is done for ensuring the well-being for the household, and only then the family sits down to dinner, with a festively decorated ever-green tree symbolizing the eternal life in the corner. The twelve dishes on the table symbolize the twelve months of the year, in which the sun is born, comes to its ripe strength, provides for the bountiful harvest, gets tired, grows old and dies to be born again for a new twelve-month cycle.

Christmas dinner is a purely family occasion with no guests invited but if anyone happens to wander into the village, they will be invited to join and partake of the meal, and will be offered to stay the night. Nobody must be alone on Christmas night, no matter what his or her circumstances are, and the Hutsuls, in addition to offering hospitality, usual for the people living in the mountains, behave like true Christians in this respect, and offer the warmth of their hearts and of their homes to those who need them.

At the midnight hour, when the night of death and rebirth begins moving towards the morning, with “the sun preparing to ride the mighty horned bulls towards the summer,” the forces of evil begin to scamper away and hide — they leave the people, their houses, their cattle, their fields alone making way for the Glad news. And then the really cheerful holiday begins. Little kolyadnyky — children who join kolyaduvannya — sing Christmas carols, Hutsul style, going from house to house, wishing well and receiving presents. They bring the news about the birth of Jesus Christ the Saviour to every house. Handfuls of wheat seeds are thrown around — for a good harvest.

After the morning service, the priest blesses the grown-up kolyadnyky and encourages them to start the singing and merry-making. Each group of kolyadnyky (locally called “parties”) first go their own way and then all of them join together and go around the village knocking at the doors, singing Christmas songs and congratulating people on the birth of Christ. It is called kolyada, the Word of God to be heard in every house.

The village of Kryvorivnya is famous for the largest number of kolyadnyky who put on their best dresses to show off the richness of their design and decoration. They are also reputed to know more kolyadky songs than kolyadnyky elsewhere. Kolyaduvannya is an ancient tradition symbolizing the unity with nature, reflecting Hutsul mythology and religion and linking the ages — the past made ever-lasting present.

Your perfect hotel to celebrate Christmas in the Carpathian mts

A local lodge is for the people who desire to immerse in a world of authentic creativity and the Hutsul way of life. 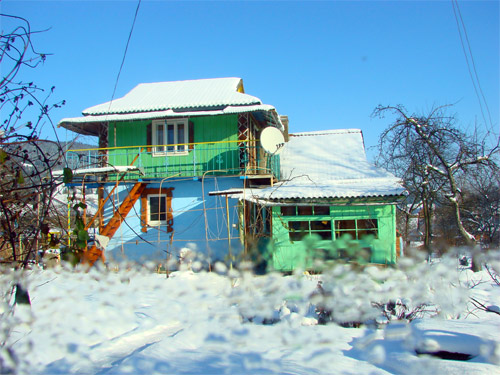 The two-storey wooden house, in old Ukrainian style, is for 6-8 persons. Inside it is decorated by natural wood, wicker, bamboo, stone and mosaic. 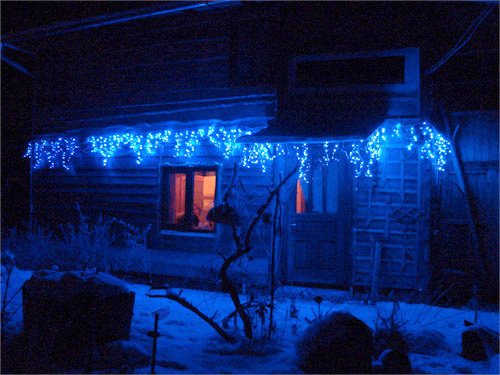 On the ground floor there is a bedroom (2 single beds, TV set, wardrobe), 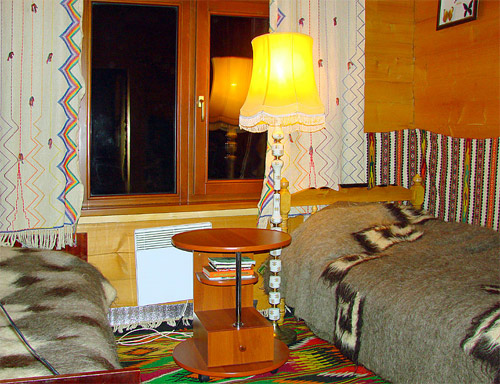 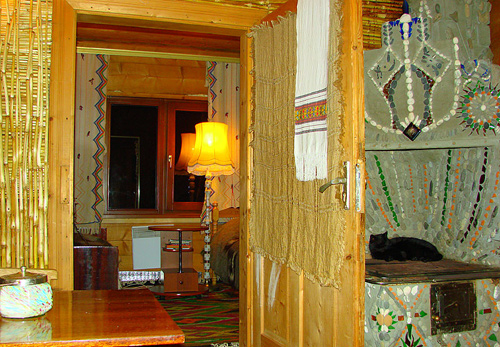 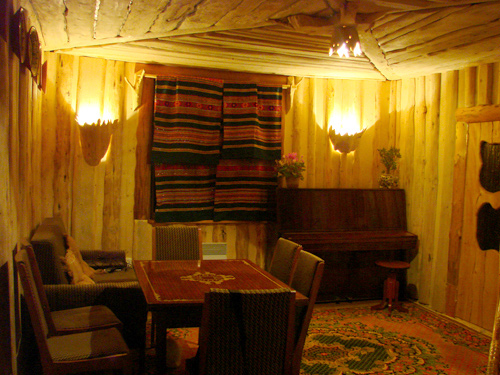 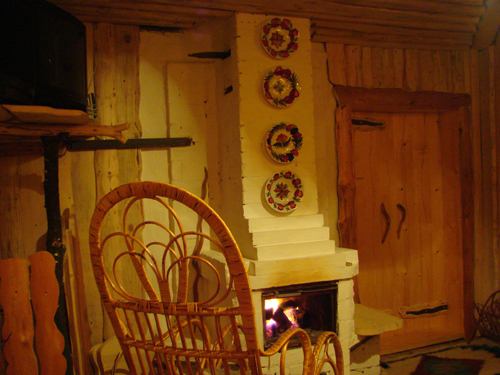 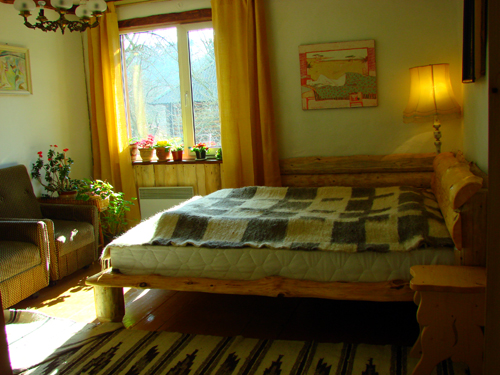 The farmhouse is designed in a true Hutsul manner: you will find hand-woven rugs, embroidered towels, traditional Hutsul garments, crockery, and many other Hutsul household objects. Through a separate entrance, walk into a sunlit veranda and larger dining area furnished with traditional woven wood furniture.

Xmas tour in the Carpathians. Prices