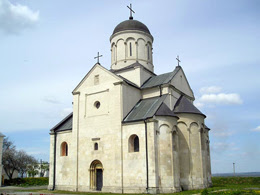 The temple was built in 1194 by Galician-Volyn Prince Roman Mstyslavovych in honor of his grandfather — the Kyiv Prince Izyaslav (whose Christian name is Panteleimon). It is a famous example of “Galician Baroque”. During the times of the Galician principality, there was a fortified outpost of the capital city – Boyarsky Dvir, later — the monastery, which was located inside a powerful defense complex, well fortified by considered system of walls, ditches, defensive walls and natural elements — the rivers Dnister and Limnytsya. The monumental white-stone church was built on this territory, with samples of carvings and numerous graffiti and drawings on the walls.

The church was sanctified into the cathedral for the catholic archbishop (about 1344), after the capture of Galicia by Poland. Then it got the name -the church of St.Stanislaw. In 1595 King Sygizmunt III transferred the church into the ownership of the monastery of St. Francis Order in Galicia. The building was raised from ruin and completely rebuilt by Franciscans during the 1598-1611 into basilica church that had significant sings of the baroque style. Since then the temple suffered from destruction. The monument was repeatedly restored in the 20th century. The last reconstruction was finished in 1998. The exterior and interior of the temple is close to the original form.

Today this temple belongs to the Greek-Catholic community.