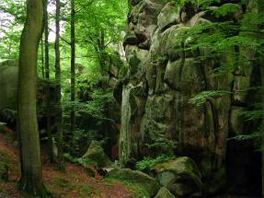 Dovbush Rocks is a picturesque and a very popular among tourists part of the Carpathian (Ivano-Frankivsk region, Yaremche). Despite the numerous visitors and tourist infrastructure, this area still has excellent ecology and wonderful nature.

Geologists have determined that this rock mass formed more than 70 million years ago and was situated on the bottom of a long dried-up sea. The rocks stretch from the east to the west for almost 1 kilometer, being 200 meters wide.

Oleksa Dovbush (1700-1745)
Dovbush is a Ukrainian hero and an outstanding leader of Carpathian opryshky movement. This national insurrectionary movement existed from the 16th to the 18th century and was aimed against selfhood and large land proprietors. Rebels hid in the Carpathians, from where they raided estates, robbed and set them to fire together with bills of debt and papers justifying landlords’ rights to own land and peasants. The valuables and money received in such way were often distributed among the poor. That is why Oleksa Dovbush is called the Ukrainian Robin Hood.

The rocks are formed by sandstone, polished for centuries by rain and wind. As a result, these influences produced a chaotic agglomerate of polished giant lumps of stone. There are rocks looking like huge towers, and boulders of fancy shape pitched one upon the other: some of them manage, by a miracle, to keep their balance and do not fall. In the rocks there are many caves and winding paths, with some of them leading to canyons between the rocks, so narrow that a man could only scrape through. For the last fifty years the rocks became covered with beeches and fir trees. From the top of the rocks a wonderful view can be seen.

Along the canyons of the rock mass tourist paths are arranged, while steep slopes of the rocks have been favored by alpinists since the early 20th century, for the purpose of training and com-petitions. The sports importance of the rocks is even more justified by the fact that all-Union alpinist competitions were held here in the 1970s. In 1981, the rocks were proclaimed a reserve territory.

Dovbush rocks have a rich and interesting history. Archaeologists have discovered that in the 17th-10th centuries B. C. there was a pagan sanctuary with an observatory. Later the place was settled by Christian hermits, land in the 12th century the monastery was turned into a fortress that guarded the approaches to Carpathian passes. It was one of the fortresses with which Prince Yaroslav Osmomysl “braced” the Carpathians, as the author of “The Lay of Igor’s Warfare” put it. The stronghold resisted the Tatar-Mongol invasion and existed until die 16th century.

In the 17th-18th centuries, opryshky, Ukrainian peasants who rebelled against their Polish landlords, had their base in those rocks. They received their present-day name in honor of Oleksa Dovbush, the leader of opryshky, who had his camp there in 1743.

In the Carpathians you can meet a similar complex of rocks in Bubnyshche, near Bolekhiv.