Hutsul horse is not very big, but strong, brave and resistant 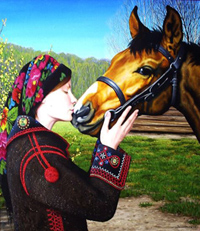 There is a special race of the horse called Hutsul horse. These horses are strong enough to live in mountains. Such horses can be called hutsulyk. Hutsul horse is not very big, but strong, brave and resistant. The horses were used by the shepherds to ride and to transport goods. At present, Hutsul horse is a family friendly horse, which can be worth of its hypotherapy, agro-tourist and high mountain tourist value (horse riding in the Carpathians).

The farmers were not breeding such horses up to the mid 19th century. The first ranch had been established in 1856 in the southern east part of Hutsul land it is still exist, being in charge of Romanian Ministry of Forestry). In the Galician part of Hutsul land, at the end of 19th century the ranches in Kosiv and Zhabie (Verkhovyna) were founded. The Association of Hutsul Horses Farmers has been setup in 1925.

There are several Hutsul horses ranches, where the husbandry is carried out without the stables, in herds. There are the ranches in Serednie Male and in Tabun. For the whole year on the glades horse are on their own. The Hutsul horse is a vanishing animal protected by the World Strategy of Preservation Genetic Reserves of Farm Animals FAO.

There are not so many information about the Hutsul horses ranches in Hutsul land after the World War II. There were at least two ranches where the horses were living in herds. Certainly, it was in kolkhoz “40-years of October” in Galician part of Hutsul land, as well as in Bukovina in kolkhoz “Progress“. But in the times of Soviets in Hutsul Land it was not allowed to keep the private horse by Hutsul.

Nowadays, there is the Association of the Hutsul Horse Race Farmers in Kosiv in Ukrainian Hutsul land.