The Hutsul dress is one of the splendid types of folk dresses in the Carpathians. It is originally colorful with plenty forms and attractively embroidered. The materials used in the Hutsul dress were completely made with local goods. Flax was woven in every Hutsul farm. The cloth was taken from the fullers. The woolen thread was span on spindles and spinning-wheels. The leather was fabricated from horned cattle, sheep and goats. From horn there were made powder-horns, from the timber sticks of axes (topirtsi), sticks (kelef) or butts of rifles and pistols. The Hutsul bought only corals and beads from Venetian glass, ribbons and kerchiefs and especially brass from which Hutsul made jewelry such as rings, bracelets, necklaces and buckles.

Hutsul everyday clothes (zavsidnyi) differed from the feast clothes (pryludnoho). There was also a special type of the celebration clothes like wedding clothes.

There were exceptionally splendid feast clothes. Men wore wide trousers in black or white color (kholozhni) or rather slim red trousers called krashanytsi. They used a thin leather belt (bukuriya). The shirts were made from flax with embroidered sleeves and collar. The cuts on the chest were also embroidered. The shirt was always long and wore out of trousers. The shirt was bended by thick leather belt (cheres) very stuffed with pressed motives and brass or silver buttons and buckles.

Long hair was brushed with some butter. The hats were black felt with stiff crown and curved brim (kresania). The crown of hat was wrapped by gold hatband (basaman) and a brass thin plate with colorful wooden threads (bayorky). The boys put the feathers or flowers behind the hatband. The hat had also some wooden knobs (kytytsi).

In winter men used a red or a dark blue klepanya sewed from doth with sheep-fur and outside with a fox-fur. They also used a black sheep-fur schapskas with a collar. Hutsul used a wide doth red jacket called krashenyak or a black one called serdak or a slim one called baybarak. All the jackets were rich with some colorful laces. In the winter they used the long grey cloth coats called manta with either a long collar or a hood.

Women used long to half of the leg similar to the men shirts. Typical shirt had preciously embroidered sleeves and collar. The cuts on the chest were also embroidered. On the shirt Hutsul woman wore two aprons a wider one in the back and a thinner one in the front. She also used a handling woolen belt called popruzhka or a leather one bukuriya. There were woolen stripped aprons with woven patterns. For a special day Hutsul woman wore aprons with golden or silver woven motifs. Girls had their braids or pigtails hair with some ribbons or beads stringed on. Sometimes, the hair was very advanced (uplit) with tresses, ribbons and woolen lashes. During the summer they also had flowers in their hair. Married women wore cloth caps and bandannas with knobs. They used traditionally long strip of cloth ornamented on both ends called peremitka. It wrapped hear, a neck and a chin. Occasionally women used colored kerchiefs. Women wore a white long cloth cape called gugla.

Very characteristic in Hutsul folk wear was an application of embroidery with many motifs and patterns. Most of them were magical signs such as crosses, circles, rosettes and life-trees. Many embroidery applied had not only a lot of geometrical forms but also plants and animals design. They were made using very thin woolen or a cloth yarn and sometimes silver or gold thread.

As an addition Hutsul used a lot of shoulder and carrier bags. They were made of wool (dziobnya) or leather (tashka, tobishko) with a great number of knobs and buttons.

Hutsul were very creative in jewelry products. Both men and women wore rings and crosses and attractive buckles made of brass. Men wore quite heavy cross made of brass or silver on the chain or several thin chains called rekizki over a neck. Women wore diverse earrings, necklaces and corral chokers called gerdan. They wore also several heavy necklaces with brass crosses or coins needled on the brass thread called zgarda. Hutsul women wore corals and beads from Venetian glass thread on thin leather rope.

For Hutsul men made use of smoking accessories and guns was very trendy. Pipes (lyulky), pipe tools and snuffing boxes were commonly used. They were very accurate. Guns epecially pistols were also used with the celebration clothes as well as powder-horns and knifes and daggers placed on the sling. Sometimes Hutsul took their very ornamented riffles.

After the World War II, Hutsul culture as an extraordinary ethnic and peasant one was protected by a Soviet administration and kept their tradition and customs. Recently the tradition is coming back not only as a tourist attraction but also as an identity sign of local community. The traditional Hutsul dress is still worn during the holidays and local events. It is not all manufactured locally and uses new fabrics of novel colors and patterns but it is still very fascinating.

Women wore long shirts which reached up to the calves. Neckbands, cuffs and insets were embroidered. In the region over the White Cheremosh River sleeves were also embroidered. An embroidered shirt required a lot of work that’s why it was so expensive. Instead of dress Hutsul women wore a skirt of two spare parts – front and back parts which were girded on the waist with a waistband or a narrow strap. They wore slippers, wool socks, foot clothes and sandals as men wore. In winter women wore cloth knee bandages tied above the knees. Over the shirt they wore keptar (a short sleeveless fur coat), serdak (a short woolen cloth coat) and also a sheepskin coat. On holidays they wore a white wool sleeveless cape with a hood and a silk kerchief, which felt down in form of a triangle. On the neck they hung a shiny glass necklace, a necklace of silver coins beaded on a chain or brass crosses.

Girls’ heads were not covered both in summer and in winter; their hair was greased and braided in two small plaits parting in the middle of the head; than plaits sometimes could be braided into one thicker plait. Hutsul women combed their hair only once a week. Young married woman had kerchiefs on their heads, and on holidays they wore wimples. The old ones had sticks in their hands for propping up.

Hutsul clothing was expensive, because embroidery and all kinds of adornment cost a lot. And also Hutsuls liked to chuck their weight about, therefore it was not surprising that many of them spent their estates for clothing and amusements. Their good nature borders on their large frivolity. 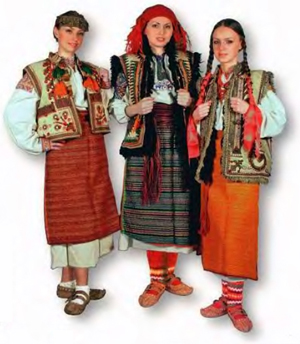 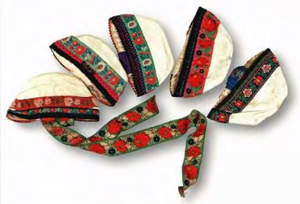 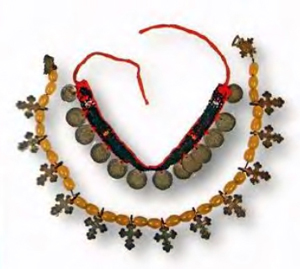 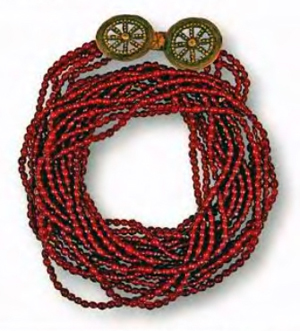