Along with Kolomyya and Halych, Rohatyn is one of the most comfortable small towns of Prykarpattya. For a tourist Rohatyn is a paradise: two wooden churches (one of them is an example of galician wooden temple), old defensive church, synagogue and more. But the town hall and the castle have not survived…

By the way, Rohatyn is the birthplace of Roksolana!

About Rohatyn in details

On the busy highway Ivano-Frankivsk — Lviv is located an ancient Ukrainian town of Rohatyn, whose history covers almost eight centuries. In the XII-XVII cent., Rohatyn was a fortress. Already in the XIV-XV cent., it was one of the major cities, with advanced production and trade. A known Orthodox Rohatyn Brotherhood, one of whose members was a leading Ukrainian public figure — Yuriy Rohatynets, worked here. The greatest sorrow and suffering in the sixteenth and seventeenth centuries were inflicted on the people of Ukraine and, in particular, of Rohatyn by the attacks of Turkish-Tatar hordes.

During one of them in 1520, the town was burnt down; many residents were taken into captivity. Among them was a 15-year-old girl Nastia Lisovska. Sold to harem, she managed to bewilder the most powerful sultan in the history of the Ottoman Empire — Suleiman the Magnificent (Conqueror) with her mind and charm — and very quickly she turned from a disenfranchised slave into his favourite wife. Over 40 years this woman played a significant role in the cultural and political life of the empire. At the courtyard she was called Khaseki Hurrem (Good wife), and European contemporaries knew her as “Rossa”, “Russa”, “Rosa”, “Roksolana“, i.e. a Ukrainian (Roksolaniya is one of the ancient names of Ukraine).

Roksolana had a significant impact on foreign policy of the empire, she participated in determining the successor to the throne. As a result, after the death of his father, Roksolanas son Selim ascended the throne as Selim II. In honor of this glorious woman, in 1999 in Rohatyn the monument to Roksolana was set on the central square in place of the former Lenin monument.

Nearby, on the eastern side of Rynok (Market) Square dominates a sacred building, which originally combines the principles of military and religious architecture — the Church of St. Mykolai (St. Nicholas). This splendid sanctuary with 30 m high stone quadrangular tower, according to archival documents, was built in 1666. However, architectural techniques manifest the earlier origin of the monument, which contains inherent elements of Gothic and Renaissance styles. The church tower was used not only as a belfry, but as an observation point.

At the opposite end of Rynok Square, there is another example of military construction — the Church of Nativity (XIV-XV c.).

Besides the Church of St. Nicholas and the Nativity Church two other sacred wooden architectural monuments have survived in Rohatyn. In the former suburbs Babyntsi — the Church of St. Nicholas (1729) has been preserved and on a small hill, in a quiet corner of Rohatyn lies one of the oldest wooden churches in Ukraine — the Church of the Holy Spirit (1598). Inside the church one may see iconostasis — a masterpiece of Ukrainian art of the XVII c. The iconostasis was made in 1648-1650 at the expense of Rohatyn Brothers community. Subtle carving of the iconostasis in harmony with the paintings fills the space of the temple with divine beauty. Once Rohatyn stone Nativity Church was adorned even with a more majestic iconostasis, out of which only two icons have remained. Currently they are stored at the National Museum in Lviv. Given the size of these icons, the iconostasis was to be the largest of all known Ukrainian Renaissance iconostases.

Being in Rohatyn, one should also visit the villages of Chesnyky and Pryozerne located a few kilometers from it. In Chesnyky interesting monument of Ukrainian architecture of the XIV c. – a stone Church of Assumption has been preserved. During the Tatar raids temples of God, which also performed the role of defensive fortifications, were specially built. The church in Chesnyky is one of them. Once a golden four- layer carved iconostasis with decorative painting of the XVIII c. was beaming in the interior of the church. However, its icons were stolen back in Soviet times. Today only a few old icons have been preserved in the interior. While in Pryozerne one should have a look at the Rey Palace, built in 1880- 1882 in romantic baroque style by a Lviv architect Julian Zakharevych. The palace is asymmetric in its design, with three rizalits in the facade. The coats of arms of the estate rulers of the Reys and Hlohovski have been preserved on the pediment. The entrance portal is decorated with a lion mask. A linden alley leads to the garden. Once there was a beautiful park with large fish ponds, which the name of the area comes from.

Top places to visit in Rohatyn

Along with Kolomyya and Halych, Rohatyn is one of the most comfortable small towns of Prykarpattya. For a tourist Rohatyn is a paradise: two wooden churches (one of them is an example of galician wooden temple), old defensive church, synagogue and more. But the town hall and the castle have not survived… By the way, Rohatyn is the birthplace of Roksolana! 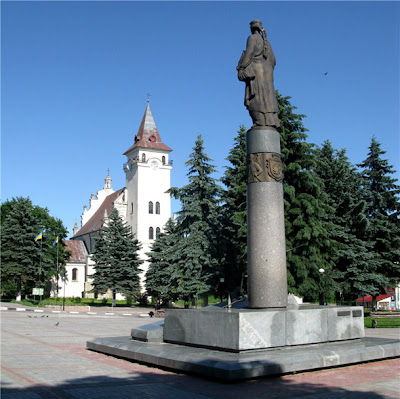 The central square (formerly, Market) has a name of the most famous native of the city, Roksolana. A daughter of the local priest and a wife of the most powerful sultan in the history of the Ottoman Empire — Suleiman the Magnificent. The heroine’s mausoleum is situated in Istambul, in Sulaymaniyah mosque. 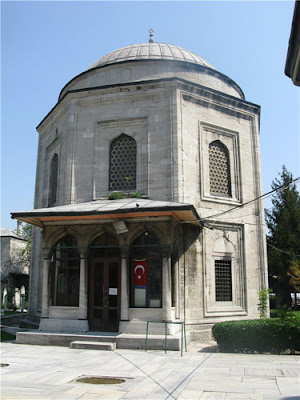 The Roman Catholic Church of St. Nicholas is a temple with the elements of Gothic, Baroque and Renaissance. 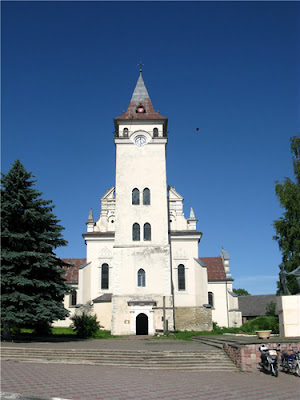 You can see the old stone houses of XIX-XX cent. on the central square. 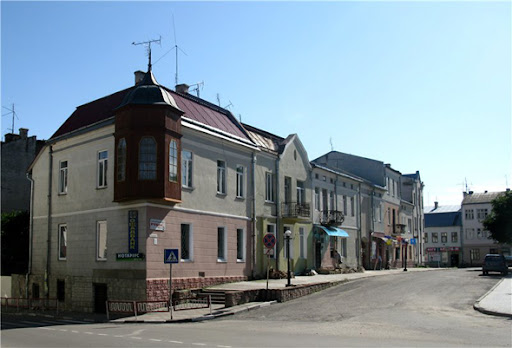 However, the most valuable and interesting building of Rohatyn is the Church of Holy Spirit. It’s a true masterpiece of wooden architecture and one of the best wooden churches in Ukraine. 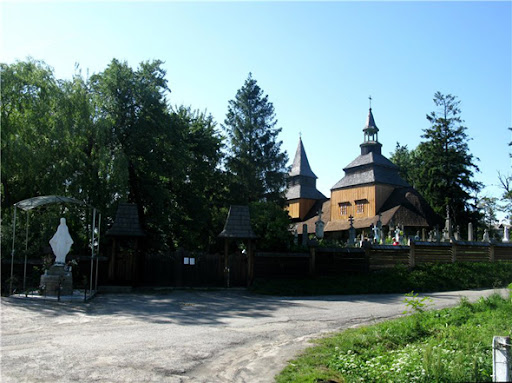 The Church was built in 1598 over the old wooden temple. 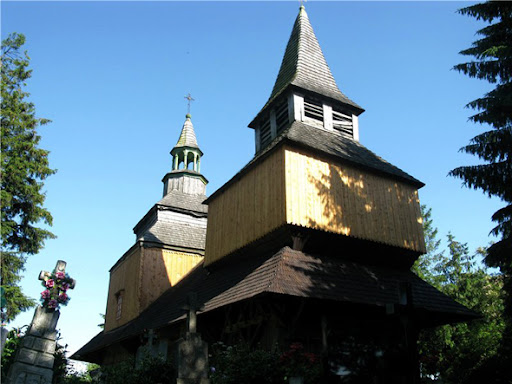 The old cemetery is situated around the church. Its tombestones are as impressive as the temple itself. 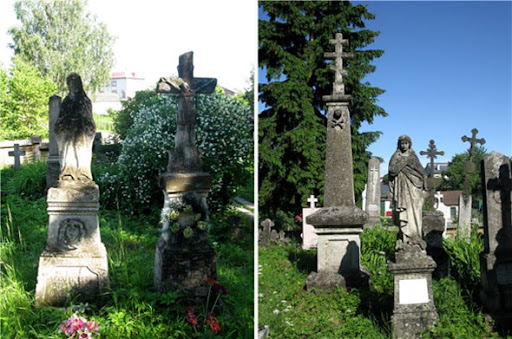 The Church of St. Nicholas is not so old and unique as the temple of the Holy Spirit. Built on a hill above the stream next to a Jewish (!) cemetery. 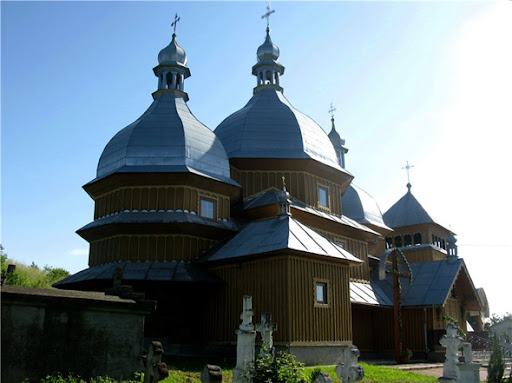 Jewish kirkut and the Greek-Catholic church nearby. 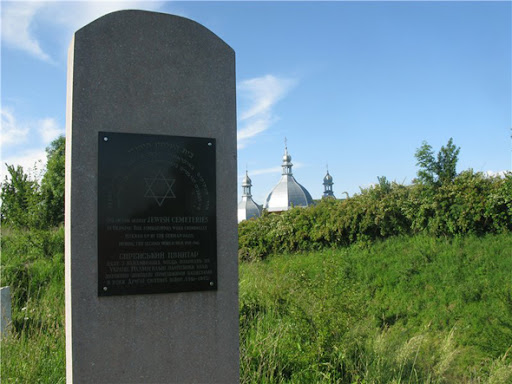