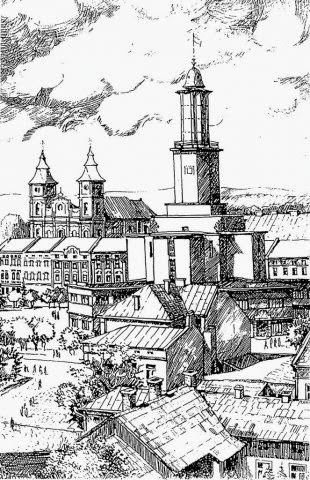 Austrians had brought a peace into people’s life as a result the population of the city was increased (in 1849 it was 11 000). Many peer started to settle in the suburbs, outside the fortification. In 1820, a great part of fortification had been destroyed and suitable conditions for territorial development of the city were created. There were 4 squares and 24 streets in the city of that time.

In 1782, the city became a residence of rule for one out of 19 Galician districts.

In 1786 there had been founded a circuit court (forum nobilium) for civil cases and in 1797 a criminal court established in the city. Then it follows to remember in sanitary industry a simple hospital had been built in 1841 and four years later there was set up Jewish hospital.

The period of stay of Stanislaviv in composition Austro-Hungarian Empire was marked a flourishing architectural styles of the city also. This period can be parted into two stages divided by one event, which had come into the history with metaphorical name “Fruit Jelly Fire“. It happened in 1868 when on modern Schevchenko Street fruit jelly had been boiled by hostess. The wind-scattered embers so far away, that 25% of all buildings of the city were burnt and the rest buildings were damaged. That’s why only some buildings of that period (1772-1868) have been saved: 2 Starozamkova Street, 14 Mel’nychuka Street, 14 Shevchenka Street, 12,14,35,37,39 and 41 Halytska Street; 7, 8 Rynok Square; 2,4,6 Scheremety Street and some others.

The rest buildings belong to the second half of the 19th century-first half of the 20th century. These buildings are characterized by various architectural styles: Neo-Classicism, Neo-Gothic, Neo-Baroque, Eclecticism, late Romanticism, Secession, Modernism and the beginning of Constructivism. This period is also famous for the first parks in the city.

This time has been described in details in several monographic and tourist publications, so we will focus our attention on the most interesting buildings only and some interesting facts connected to them.

In 1866, railway station was built and on September 1, it was solemnly opened. The building was erected in Rundbogenstil, which is a part of Austrian-German architectural school. Interior of railway station was characterized by symmetric forms, without domination of central line and was decorated by frieze on arcades. None of the railway station buildings erected at that time preserved its original view to our days.

The railway station in Stanislaviv was rebuilt in 1904-1908 by the project of Ernest Baudisch, a senior adviser of Austro-Hungarian rail track building Ministry. Ernest Baudisch also had worked on the building for direction of railway (2 Halytska Street). The railway station in Stanislaviv and some other cities of Halychyna was rebuilt due to the increase in passengers and the necessity to provide better conditions tor the people. For this reason foremost was increased central vestibule, the forms of the waiting hall changed and the building itself acquired some traits of modernized Renaissance.

At the cross-ways of Gryunvaldska and Vasyliyanok Streets one can find Saint Stanislav Kostka Jesuit temple with the memorial sign above the entrance which says it was built in 1894-1895 in Neo-Baroque style. The author of the project was Stanislav Kryzhanovsky from Krakow. It is the only Neo-Baroque temple in the city. Jesuits chose that style in order to show that they were in the city from the 18th century and their former temple was built in Baroque style. Nowadays only choir loft remains authentic in the temple interior. During the times of the USSR regional archives were there, and in the 90ies the temple became the cathedral of the Ukrainian Orthodox Church, Kyiv patriarchate.

The next building we will pay attention to is the house of state tax inspectorate and direction of treasury on 31 Hrushevsky Street. It was built by Francis Skovron in Neo-Baroque style. It has been decorated by numerous of plant ornament and chimerical mascarons. Inside the building there is one of few stained glass windows in our city.

When we go to Strachenykh Street we can see the only functioning synagogue in Ivano-Frankivsk. It was built in 1895-1899. Earlier one could find Church of Resurrection of the Ukrainian community, which had been built in 1670 there. The history of this synagogue began in 1888. On order of Jewish Sacred Society, an architect Maksymilian Schloss started to put the plan of the synagogue into practice. He designed two variants of the temple, which were sent to the architect Wilhelm Styasny to Vienna for correc­tion. After his improvements in 1895, the building works had been launched and was completed in four years. The original style of the temple is eclectically-moorish. Unfortunately, in the 40ies of the 20th century the cupolas of the synagogue were destroyed. Now the building itself is used for different purposes but on the second floor there is a functioning synagogue.

On November 29,1891 the city theatre built by Y. Lapitsky’s project was opened. The interesting fact is that the theatre is the only build­ing in our city, which has two balconies in the audience hall. As the memorial plaque states Mariya Zankovetska, Mykola Sadovskiy Solomiya Kryschelnytska were on the stage of this theatre at different times. On November 14, 1943, a tragic event happened there. The premiere of Yaroslav Bamychy’s operetta “Scharika” which told about the life of Ukrainian Sich Riflemen was interrupted by Gestapo agents who broke in to the theater. Then they executed a mob law of shooting 27 Ukrainian rebels near the synagogue in front of the theatre. All historians distinguish brevity of Ukrainian elite who met death with the words “Glory to Ukraine!” and sang Ukrainian hymn.

Only in 1998 people in Ivano-Frankivsk could see operetta “Scharika” (by director F. Stryhun, Lviv Opera theatre named after of Zankovetska) in the theatre again – nowadays Philharmoniya. During the operetta, people honored the memory of those who had died there. Then it was decided to establish the monument at that place which was done by a local sculptor V. Dovbenyuk.

There is a public square named after Adam Mickevych with the monument to the poet near Philharmoniya. This monument is one of the oldest preserved in Ivano-Frankivsk (1898 by sculptor T. Blotnycky).

Not far away from each other have been situated buildings projected by Jan Kudelsky, one of the most famous city architects. This is a House of The District Council (4 Mickevycha Street) in Neo-Baroque style, 1894-1895; also Stanislaviv sections of The Krakow Community of Mu­tual Help (7 Hrushevsky Street) and a bank (4 Hrushevsky Street) in Neo-Renaissance style, 1907.

There are two houses almost in front of each other – a former hotel “Union” (4 Nezalezhnist Street) the first five-storeyed building deco­rated with the sculptures of M. Antonyak, which is a forerunner of Constructivism style.

On opposite side of the street there is a prototype of Constructivism Hauswald’s building erected in 1913 (11 Nezalezhnist Street). Both buildings were built according to the project of Frederick Janusch, an architect who outran his epoch having introduced Constructivism in the architecture of Stanislaviv.

3 Nezalezhnist Street – is a former Gartenberg’s passage, which was built in 1904 by the project of G. Koschytsya who was from Vienna. Local skilled workers Boublik and Kydelsky also took part in the project. In front of the passage there was an old Stanislaviv park “Kratterivka” founded in 1825 by the assistance of the burgomaster Francis Kratter.

The Gordynskiy Street is famous for its two buildings, the one of which is God’s Mother Assistance Church built in 1904 by Kryzhanovskiy’s project in Neo-Gothic style. The interesting thing is that during the public worships play there another keyboard instrument was used instead of organ – harmonium. In Ukraine, this instrument was very rare. Another interesting building on this street is the school named after a queen Sophia that was erected in 1895 according to Jan Lempitsky’s project. It was a successful attempt to make an administrative building in Neo-Gothic maintaining all style canons and using only brick to decorate the facade of the building.

There is the building of Ukrainian grammar school at 44 Shevchenko Street, erected in 1908. The author of chimerical figures on facade is a sculp­tor M. Bryns’ky.

The street ends up with the city park named after T. Shevchenko, founded on the place of the former Zvirynets grove and Radetskyy field in 1896. The oldest building there is a house of barons Romaschkanivs (1842) who were the owners of this territory in the 19th century.

Ivano-Frankivsk memorial square on Nezalezhnist Street, behind the hotel “Nadiya” is one of the oldest cemeteries in Galicia, the first buri­als of which were in 1782. This necropolis was far outside the city, as it had demanded Austrian rulers so in order to prevent infectious diseases.

Nowadays only some tombs have been preserved. Among them, we can find the monument of a famous composer – Denys Sichynskiy who was the organizer of the first musical school for children in Stanislaviv. The author of the monument is Mykhailo Zoriy. He made it as a symbol: in the form of a bandura the lower side of which contains a cube in which the author “encoded” the music, its chords and sounds. Therefore, the music is still alive there even in the stone.

On the opposite side one can find Lev Bachynskiy’s tomb. He was a political leader and public figure, a lawyer, vice president of Western Ukrainian (WUNR), an ambassador to Austrian and Polish parliaments, the author of many laws.

The highest tombstone (7 meters) belongs to Zygmynd Mrochkovski, a chief doctor of the city hospital. He died in 1888 saving people lives during the epidemic of abdominal typhus.

There are also the tombs of Y. Zhelekhivsky – a famous Ukrainian linguist, founder of “Prosvita” branch in Stanislaviv; M. Bychynsky – a folklorist and notary public; I. Yachno – a pedagogue, doctor of philosophy.

The cemetery was almost destroyed in 1983.

In front of the modem drama theatre there was the German Church built in Neo-Gothic style in 1885. A bishop Theodor Tselder had masses there. He did much charity in Stanislaviv and built a peculiar town in the center of the city, which included houses, a church, an educational establishments and asylums for children and a factory. The church was destroyed at the beginning of the 70ies.

Moreover, at the end let us have a look at “Mayzli” area where there is a Neo-Gothic style the Catholic Church of Saint Joseph. It is the last out of three nowadays-existing churches of Austro-Hungarian period, which was erected in 1910-1913, and the tower finished in 1925 by project of Felician Bayan.

The economical life of Stanislaviv 27.7% of the population made their living from artisanship, manufacturing and mining industry, nearly 15% were craftsmen – tailors, shoemakers, bricklayers, carvers, metalworkers, whitesmiths, bakers and artists.

Locomotives and carriages could be repaired at the rail plant. 800 people worked there.

Small industrial establishments were not counted.

Beside there was cotton factory in Kryhivci and institutions for ceramic manufacture in village Patsykiv.