In December 2015, the Poles will start up the train Warsaw – Lviv 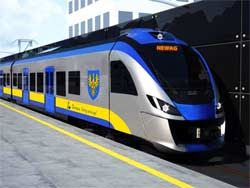 From mid-December 2015 the Polish railway operator PKP Intercity introduces a new international train’s schedule. One of the innovations is starting up the direct train connection between Warsaw and Lviv.

Direct trains from Wrocław and Warsaw will travel to Lviv through Krakow. Their schedule will not be changed. This information is not yet shown in the schedule. The wagons from Warsaw will be integrated into the train that runs between Wroclaw and Lviv.

The trains from Wrocław and Warsaw will run through Krakow arriving to Lviv at 6:03 or 7:15 in the morning, depending on the date. The schedule of the trains running backwards is not yet published.

Now only one night train “Lviv Express” runs to Lviv. It runs every day from Wrocław through Krakow. The train leaves Wrocław at 16:54 (local time), and arrives to Lviv at 6:03 or 7:15 (depending on date). The departure from Lviv is at 22:59, the arrival to Wrocław – at 10:55 (local time). By July this year the train had been running on a cut route Krakow-Lviv.