Yaremche (old name — Yaremcha) is a mountain resort, the most famous tourist center of Ivano-Frankivsk region, which is located at the altitude of 550-585 m above sea level. It was first mentioned in 1787. The villages of Dora and Yamna, which not long ago entered the city boundaries, have somewhat earlier history. Their origin is referred to the XIV-XV c.

Beautiful nature, clean air, and picturesque valley of the Prut River are the main attraction of Yaremche. The town is surrounded by the Horhany mountains, whose name originates from the mountains spreading on the tops and slopes of ridges. Even in Austro-Hungarian times, Yaremche was a popular resort. Boarding houses, hotels, restaurants, and private sector were built here. In summer, the village turned into a holiday venue for affluent people from Vienna, Warsaw, Krakow, Lviv and other cities.

In Soviet times Yaremche did not lose its value as a resort. Now there are tourist centers, health centers, preventive clinics, rest homes and camps for children, motels, private care homes both in the town and on its outskirts. In winter you can ski or sleigh on the slopes of the nearest resorts — Bukovel, Vorokhta, Yablunytsia, Drahobrat.

First records of Yaremche date back to the year 1727. According to certain sources, the name “Yaremche” is derived from the name of a peasant Yarema Hodovanets, who fled to this area from his feudal lord over two hundred years ago.

First records of the neighboring villages Dora and Yamna appear circa 1643.

Yaremche started to develop after the construction of “Stanislav-Yaremche-Vorokhta-Rakhiv” railway line in 1894. This railway line was a major channel of transporting Carpathian timber to industrially developed areas of Austro-Hungary, Poland and other countries.

In 1977, City of Yaremche was granted regional status. Nowadays it is a recognized tourism and recreation center of the Precarpathian Area. The city it is located in the southwestern part of Ivano-Frankivsk Region and occupies the central part of Ukrainian Carpathians (Horhany, Pokuttya and Bukovyna Carpathians, and Chornohory mountain ridges).

The Yaremche City Council Territory represents one of the most important recreational areas of Ukraine as a whole and Carpathian Region in particular. Many of the highest Carpathian peaks are located here.

Passing through the village of Dora on the way to Yaremche, one cannot but notice two delicate wooden sacred buildings. Those are the Church of the Holy Prophet Elias and a belfry nearby, built in 1937, located on the territory of the Greek Catholic Studio monastery of St. Elias and St. John the Baptist. The interior of the church is simple but elegant at the same time, in the traditional hutsul style. The wooden oval iconostasis that symbolizes the All-seeing Eye has always engaged the visitors delight. The director of the local school Svyshchuk Ivan, who died in Germany during World War II, was the author of the iconostasis.

Studite is a rule which was founded in V century by a man named Studiy. He built a church in Constantinople of John the Baptist. Studites came after baptism to Kiev Rus’ in 988 and soon the ordyn collapsed and Metropolitan Andriy Sheptytsky revived it from the oblivion having established the rank of St.Theodore Studite in 1901. Lavra in Univ is just the capital of studites. Manyavsky Skit was also studite center – the only one in the Carpathian region. Three monks-studies came to Dor in 1935 – with the intent to establish a monastery there.

A land plot was given by the family of a famous educator Elias Kukurudza (1857-1933). In 1936 at the monastery there has already been an industrial school, where village boys could learn the basics of shoemaking, tailoring and carpentry work. In summer not only pilgrims but also guests came here for the vacation. The monks didn’t have a church, they used St. Michael cathedral. It was the time to think about their own sanctuary. There is the legend about how the monks Michael, Patrick and Dionysius saw the shining white cloth, which let down from heaven. Then UFO gained height again and disappeared. The monks thought that the place where the Magic Carpet landed is the right place for building a church.

In the spring of 1937 talented master John Jaworski from the next village took up building a new church. In two years the temple was ready, but it wasn’t Jaworski who finished it, but Petro Grigorchuk (it is the place of modern Verhovyna).The temple was consecrated under the title of St. Elias – perhaps in honor of Kukurudza who donated his land to the monks.

An interesting church has an interesting iconostasis. It was made by burning and carving on the project of the school principal Ivan Svyschuk. His son, a priest Jaroslav, returned to Ukraine in early 1990s. In the tract he built mission-katechism center and monastery of the Congregation of St. Andrew with a small Peter and Paul’s church.

In 1968, the cathedral was made into a museum of atheism and it was used so until the end of the Soviet epoch.

In Dora there is also a missionary congregation of St. Andriy (monastery- asylum) with the Museum of Andriy Sheptytskyi, which is half a mile away from Dora, in beech forest. 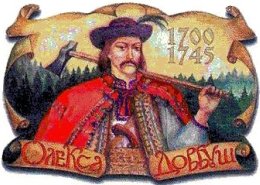 Above the Prut River, on the right slope of the valley, in the forest, there is a group of steep rocks with the height of 20 m. They are associated with the name of the legendary leader of opryshky — Oleksa Dovbush (1700-1745), who, according to a legend, was hiding here. For a long history of opryshky movement (according to one version, their name comes from the Romanian oppressor (“I forbid”, “I stop”), according to another — from the Latin oppressor “intruder”, “oppressor”, “destroyer” (of masters)) Oleksa Dovbush gained big fame. His squad acted in Hutsulshchyna in 1739-1745 briskly and successfully. Aristocratic estates were burnt one by one by them. Court acts of Stanislav (Ivano-Frankivsk) contain data on many attacks led by Oleksa Dovbush with fatal casualties and robbery. According to historians, Dovbush never shed blood in vain. The legendary attack of Oleksa’s squad of the estate of Andriy Karpinskyi is well-known. At that time the owner s wife gave birth to a son — the future classic of Polish literature Francisco Karpinskyi. Dovbush, who was regaled to dinner, retreated, and only asked to give a newborn the name “Oleksa” and gave his mother three gold coins. This event was described in the memoirs of the writer himself on the basis of family memories. It is also interesting that during the attack of the village of Black Oslavy at the end of 1738, the raid ended in a banquet, which one of the villagers organized to honour opryshky, and being moved, they ceased the ploy.

The legendary leader died on August 24, 1845 from the shot of Stephen Dzvinchuk from Kosmach, whose wife, according to a legend, was Dovbush’s mistress. In the evening of August 23, Dovbush with his gang attacked the house of Dzvinchuk, but learning that the owner was out, the comrades retreated. Meanwhile, Dzvinchuk, who had apparently hid, ambushed Dovbush and shot him. They say that when the nobles found the dying comrade, they brought him to Kosmach and questioned him trying to find out where the hidden treasures were. Dovbush’s response was: “In the meadow on Chornahora. God knows, I know… The earth will use them”. The deceased Oleksa was long carried through villages to convince people in the death of the hero, and then the body was put in Kolomyya Town Hall. By the order of Hetman Potocki, the leader s body was chopped into 12 pieces and hung on long sticks in villages and towns of Pokuttia for people to fear. Hundreds of legends and myths about it still live in the Carpathian Mountains. Mountains, rocks, caves, meadows and rivers in the Carpathians are named after Dovbush.

In Yaremche you should necessarily visit the waterfall Yaremchanskyi Huk, one of the biggest waterfalls on the Prut River. To get there it, you need to go from the highway to the bridge over the Prut River. In the mid-XIX cent., this waterfall was expanded by explosions and terrifying Prut beats the stone banks here, and enraged it rushes on from high ledges. Near the waterfall, in the traditional style of local folk architecture, stands the restaurant Hutsulshchyna, where you can be regaled to delicious hutsul dishes.

Nearby the Yaremchanskyi waterfall, in the town center, you can see the famous geological detachment over Prut. This is the 60-meter vertical rock flysch, which ends near the river. The rock forms the so-called Gothic folds — crumpled lamination edges of the upper chalk (absolute age is 60-75 million years).

Building of the Carpathian Regional Liberation Movement Museum is one of city’s most beautiful ones. Before 1993, the museum was named “Partisan Glory Museum”. With a new name came the necessity for new research of local history to ensure objective collection and representation of information.

The museum also houses an exhibit of paintings by famous Ukrainian and foreign artists. Several paintings in the collection were created by a well-known Ukrainian-Canadian artist Mykola Bidnyak, who was awarded the Shevchenko Prize in 1995.

Another exposition worth mentioning is named Metropolitan Sheptytsky Museum, and is based on the private collection of Ukrainian Greek-Catholic Church missionary Reverend Yaroslav Svishchyuk.
This museum works in close cooperation with many artistic associations, regularly organizes art exhibitions, and provides researchers with valuable information on history of the liberation movement in the Yaremche area.

Yaremche has a number of historical and cultural landmarks. Among them are:

Many buildings of tourist and recreational facilities are also of considerable architectural value. Among them are: